It is one of the most picturesque places of the Šventoji river, attracting both tourists and scholars exploring the outcrop.

It is said that the Šventoji Valley started to form about 10-12 thousand years ago. During the last icing, it was able to break through the entire sandy-pebble sediment layer (nearly 20 meters thick) and even the moraine loam beneath them in the Mikieriai area. Later, sliding sideways spread the valley and formed terraces. The largest part of the Šventoji Valley in Mikieriai area is occupied by the first terrace site, which in some places reaches up to half a kilometer. Crossing the sandy strips here, the Šventoji river fully extended her loops. Therefore, at Mikieriai the bends of the river are wide, round, and in some places connect. Even upstream currents occur in the bends. The following term is used to describe riverbeds: meandering coefficient. This is the highest coefficient of 2.14, compared to other parts of Šventoji, at Mikieriai. 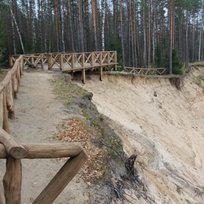 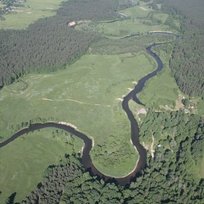