The old town of Anyksciai is small but interesting. Previously, in the city center, houses stood side by side, even in several rows. When the Germans retreated in 1944, they destroyed the entire center of Anyksciai. The buildings collapsed, but under almost every house there were large basements that have survived to this day.
On the way to the Church of the Apostle Evangelist St. Matthew, it is worth stopping in a red brick multi-story building, on which many signs of various institutions hung over the years - these were both eateries and the Jewish National Bank. The building became most famous because of the history of Anykščiai wine, which began there. In the basements of this house, Balys Karazia rented three rooms in 1926, where in the first season he made the honor of thousands of liters of apple wine.
The synagogue complex of Anyksciai stood in the very center. There were once as many as five synagogues. During the years of occupation, one of them, namely the Old Synagogue, was turned into a bakery, as a result, now a tall pipe rises from an abandoned building.
Walking through the Old Town, you will find many cozy cafes, restaurants where you can have a cup of coffee or tea and feel the beauty and spirit of this small town. 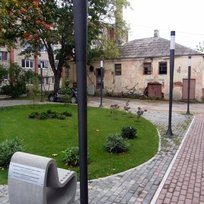